Maui at the center of the evolution of television. Published in Hawaii Film and TV Magazine Jan ’13 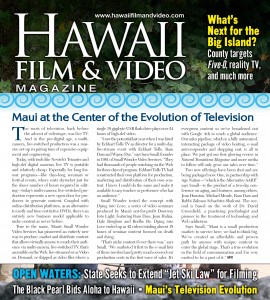 Maui at the center of the evolution of television.

The roots of Television, back before the advent of videotape, was Live TV. And in the pre-digital age, a Multi-Camera, Live-Switched production was a massive set-up requiring tons of expensive equipment and engineering.

Especially for long format programs, like days-long seminars or festival events, where costs skyrocket just for the sheer number of hours required in editing, today’s Multi-Camera, Live-Switched production represents a new open-door for producers to generate content.  Coupled with On-Line Distribution Platforms, as an alternative to costly and time restrictive DVD’s, there’s an entirely new business model applicable to niche content as never before.

True to the name, Small Wonder Video Services has pioneered an entirely new way to do produce, market and distribute content that allows virtually anyone with something to say or present to reach their audience via Multi-Camera, Live-Switched TV, that’s accessible on the Web, Live-Streamed or as Video-on-Demand, or shipped as video files where a single 18 gigabyte USB Flash Drive plays over 24 hours of Hi-Def video.

“I saw the potential last year when I was hired by Eckhart Tolle TV as Director for a multi-day, live-stream event with Eckhart Tolle, Ram Dass and Wayne Dyer”, says Sam Small, founder in 1981 of Small Wonder Video Services, “they had thousands of people watching via the web for three days of program. Eckhart Tolle TV had constructed their own platform for production, marketing and distribution of their own content.  I knew I could do the same and make it available to any teacher or performer who has an audience.”

Small Wonder tested the concept with DYING INTO LOVE, a series of video seminars produced by Maui’s not-for-profit Doorway Into Light, featuring Ram Dass, Joan Haliax, Dale Borglum and Bodhe Be. DYING INTO LOVE ended up as 42 videos totaling almost 18 hours of seminar content focused on Death and Dying.

“That’s niche content if ever there was” says Small. “We marketed it first to the email lists of those involved and pretty much covered our production costs in the first wave of sales. It’s evergreen content so we’ve broadened out with Google Ads to reach a global audience. Our sales pipeline, which is a fully automated, interacting package of video hosting, email auto-responder and shopping cart, is all in place. We just got our first glowing review in Natural Transitions Magazine and more media to follow will only grow our sales over time.”

Two new offerings have been shot and are being packaged now: One, in partnership with Age Nation, “which is the Alternative AARP” says Small, is the product of a two-day conference on Aging and features, among others, Jean Houston, Michael Meade, Ram Dass and Rabbi Zalman Schachter-Shalomi.  The second is based on the work of Dr. David Greenfield a practicing psychologist and pioneer in the treatment of Technology and Web Addiction.

Says Small, “Maui is small production market, to survive here we had to think big. We’ve created an affordable and proven path for anyone with unique content to enter the global stage. That’s a true evolution in the field of communication and I’m very excited to be a part of it.”