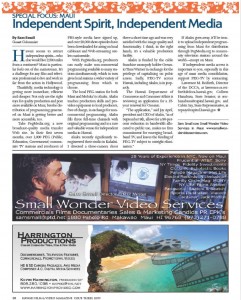 Hawaii seems to attract independent spirits – who else would live 2500 miles from anywhere?  Maui in particular feels out of the mainstream. It’s a challenge for any Film and TV professional to live and work so far from the action.

Thankfully, media technology is getting more immediate, efficient and cheaper. Not only are the right toys for quality production and post more available on Maui, but the distribution of programming generated on Maui is getting better and more accessible too.

Take PegMedia.org, a new broadcast-quality media transfer website. In their first seven months, over 1000 PEG (Public, Education, Government) community TV stations and producers of PBS style media have signed up and over 20,000 show episodes have been downloaded for airing on local cablecast and web-streaming outlets nationwide.

PegMedia.org makes it easy for producers to get non-commercial programming known and available to many stations simultaneously and gives local stations a wider variety of programming from which to choose.

The local PEG station for both Maui and Moloka’i is Akaku. Akaku teaches production skills and provides equipment to local producers, free of charge, in exchange for noncommercial programming. Akaku fills three fulltime channels with original programming and is a rare and valuable venue for independent media in Hawaii.

Akaku recently significantly re-engineered their studio in Kahalui. Sam Small, of Maui’s Small Wonder Video Services, directed a three-camera shoot there and was very satisfied with the image quality and functionality. “In the right hands it’s a valuable production facility”, said Small.

Akaku is funded by the cable franchise monopoly holder Oceanic/Time Warner, in exchange for the privilege of capitalizing on pubic assets, like airwaves, easements on private property, utility poles, sewers, streets and sidewalks. Sadly, PEG-TV across Hawaii, including Akaku, is in jeopardy.

The Hawaii Department of Commerce and Consumer Affairs is reviewing an application for a 15-year renewal for Oceanic. “The application,” said Jay April, President and CEO of Akaku, “as of Sept 9th, allows for a 90% reduction in bandwidth allocated to public use, makes no firm commitment for emerging broadband TV, and leaves the funding of PEG-TV subject to outright elimination.”

“PEG access is like a public park,” said April, “we all have the right to appropriately enjoy open space that’s set aside for non–commercial use. And commercial activities that benefit from their proximity to the park contribute to the construction and support of the park.”

If Akaku goes away, it’ll be ironic to upload independent programming from Maui for distribution through PegMedia.org to community television stations everywhere around the world, except on Maui.

If independent media access is important to you, especially in this age of mass media consolidation, support PEG-TV by contacting: Lawrence M. Reifurth, Director of the DCCA at: lawrence.m.reifurth@dcca.hawaii.gov  335 Merchant Street Honolulu, HI 96813 Phone (808) 587-1234